Top Games to Play With Friends 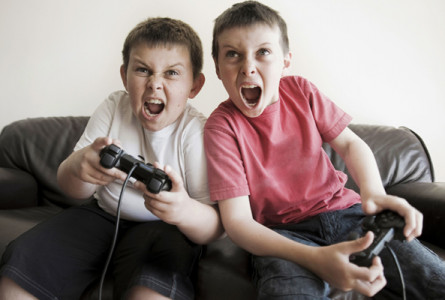 Here we collected top-10 games to play with friends in one room. Videogemes from our list are the funniest ones to make party using your console.

LEGO Dimensions is a toys-to-life video game, where players use real-world LEGO constructions and figures to explore the game’s open-world. The game has six worlds, including DC Comics, The Lord of the Rings, The LEGO Movie, The Wizard of Oz, LEGO Ninjago, and LEGO Chima, each of which has their own unique gameplay, story, and characters.

Just Dance is a game that needs no additional introduction. Dance Party has been a hit since its release. The game has awesome graphics and soundtrack and could be played both with controllers and kinect.

Mario Kart 8 is a successor of the biggest hit game in the genre. Mario Kart 8 received highest rating from lots of gaming critics. The game has various improvements from previous installments, including new antigravity mechanics, and kart customization.

Wii Party U was released in 2012 and is based on Nintendo’s popular games series. Game offers 80 minigames which can be played either solo or with up to 8 players. Multiplayer mode features several mini-game modes, including board games, sports, and puzzle games.

Bomberman is a beloved classic, which (as of 2015) has been released in 28 platforms. The game includes 8 multiplayer modes, and drop-in, drop-out mode. Has been in top-10 games to play with friends for 20 years.

Rock Band 4 is the successor of the original game. The game has lots of improvements and new songs. The game is designed for 4 players using instrument controllers. Rock Band 4 comes with a guitar, a mic, drums, a mic, and a set of keys. In the game, you can play the guitar, drums, and vocals.

Super Mario Maker is a side-scrolling platform game where you can play, create, and share your own Super Mario courses. You play as Mario, and your goal is to rescue Princess Peach from Bowser. Your course can have pipes, enemies, power-ups, and more. And you can share it for other gamers to play.

FIFA is returning with FIFA Ultimate Team, Career Mode, and Europa League. There are 20 leagues, 500 teams, and 12,000 players that you can create in FIFA Ultimate Team. EA Sports Football Club lets you play the world online. Career Mode lets you begin your journey as a manager, player, or club. And The Journey is an emotional story mode that will let you live your story on and off the pitch.

SingStar is a competitive singing game series where you take center stage, backed by music videos. SingStar has a library of more than 30,000 songs. And the game lets you use your downloaded songs.

Mortal Kombat is a fighting game that continues the epic saga of Mortal Kombat. The game combines cinematic presentation with all new gameplay to deliver the most brutal Kombat experience ever.